Stitch From Stash May Report

Not much stitching done this month.  I have started Gingerbread Village by LHN 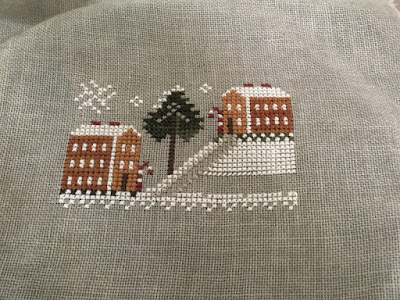 It has been an eventful month, starting with DD's birthday on May 1.
We had an extreme weather event and I have never seen so much flooding in this area.  I picked DD up from school at 3pm and we got home around 8pm.  It was pouring rain for most of that time.  Luckily I have a Landcruiser as I had to drive through water several times. Twice was over creeks flowing over bridges.  I ended up getting stuck in traffic about a km from home just after I crossed the second creek.  2 cars were trapped in floodwater across the road just after the rail crossing in front of me.  I couldn't turn around as the traffic going the other way was stopped because of the creek just behind me.  We all had to pull over to let a fire truck through once.  After about an hour the water rose enough that it started flowing onto the road where I was stuck.   That was pretty scary, trapped in the dark with the rain pelting down and hearing the rushing water from the creek and watching it rise around the car.  I was on a high bit of road and the land is fairly flat so the water can spread out a lot and it only got up about 6 inches where I was, but it was flowing very quickly.  Other smaller cars behind me weren't as lucky.   The trains stopped running as water was on the tracks.  I thought the last train was going to get stuck on the road crossing but it crawled through slowly, then the boom gates stayed down with the lights flashing. 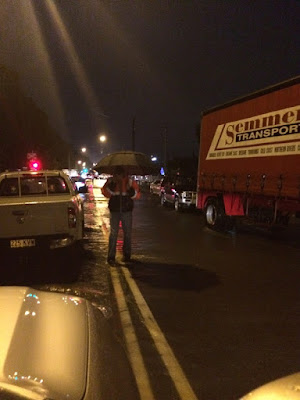 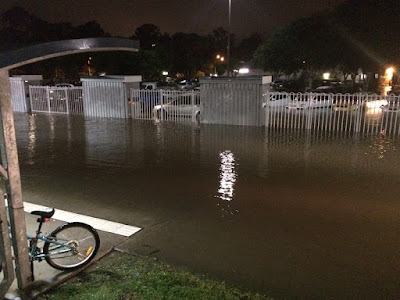 Lots of car alarms were going off as the water got into the electrical systems.

DH went a different way home and parked his car about 2km from home and walked.   He had to wade through about 800m of floodwater and over a creek.  He then walked down to where we were and took DD to walk back home while I waited in the car.  I was expecting to have to wait for hours but just after they left I was one of only a few 4wds that were allowed to go across the floodwaters.  The water was about 2 feet deep but it wasn't flowing much.  I picked up DH and DD on the way home.  The traffic was a mess because so many roads were flooded and cars had nowhere to go.  We had to go the back way and at the bottom of our street we got stuck in traffic again.   We ended up driving up the street on the wrong side to get to our driveway.  Once we were out of the car we realized a dozen cars had followed us up the wrong way and completely blocked the street!
The rain stopped, the water went down and DD played tennis early the next morning.  Lots of dead cars were abandoned on the roads in my area for the next few days.  5 people died just a bit north of here when cars were swept off roads.  Not an experience I'm in a hurry to repeat.

Oh Kate! How scary for you all. Thank God you are all well.

Oh wow, those must have been very scary moments you were going through. I hope everything will be back to normal soon so that noone is in danger any more.

Oh my goodness, Kate, that is a very frightening experience - I am so glad that you are all okay. So sad about the people who did die in the flood, though.

Kate
I live in Brisbane, Australia. Married to DH for 20 years. I have 2 children and a cat. I work from home and I like to stitch when I'm not working or driving children around. I am 46.